June 1999 — Excerpt from the Westfalenpost

On Saturday afternoon NRW‘s Minister President Wolfgang Clement put BRISTA’s ultramodern hot-dip galvanizing plant (located in the indusrtial park in Höingen) with a symbolic push of the button, to the great applause of several hundred guests of honor and citizens of the municipality, into operation. With a three-shift operation the new plant will increase the sales volume of the family business by 40 percent as well as create new jobs. Wolfgang Clement was also full of praise for the promising commitment of the company; which contributed together with others that the NRW region is among the largest exporting countries in Europe. The 10 million Mark had been well spent by BRISTA - in an area on the outskirts of Hellweg and Sauerland where the ideal world still exists, looking at the employment rate and the number of apprenticeships. Townships like Ense were in the labor market among the strongest in the country. Clement: "That is why we are envied by many!" The Prime Minister finally pointed to the significant environmental aspect of the new hot-dip galvanizing plant; all European standards are well undercut. Another reason to congratulate the ideal family company Brinkmann on behalf "of all 18 million inhabitants of NRW": "BRISTA is very successful in the market!"

The investment in Höingen makes job safer and pushes the unemployment rate down: "And that is what everybody wants." 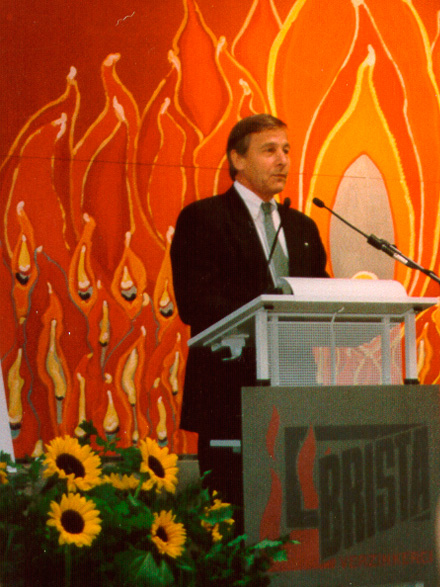