BRISTA produces its own electricity

October 2005 — Excerpt from the Westfalenpost

On the 10,000-square-meter roof the largest photovoltaic system went on line

The metal goods factory "Franz Brinkmann GmbH" (BRISTA) on Oesterweg always understood itself as a modern and environmentally friendly company that invests in the "future for people and the environment". After the construction of the big galvanizing plant six years ago, CEO Dieter Brinkmann and his team once again set  accents and start producing electricity on their own. These days the largest photovoltaic system of NRW started its operation on the roof top of a medium sized company in the industrial park in  Höingen!

Since June the companies Sharp and Shell installed 2000 modules on the 10,000-square-meter plant roof. 2,300 square meters of solar panels will produce a total of 300,000 kilowatt hours of electricity a year - about 60 times as much as a private household consumes.

Brinkmann invested about 1.2 million Euros for modules and connectors; the substructure and thus the stud frame were built by BRISTA‘s employees themselves.

The in-house mechanics also took over installation and applied a reflective coating to the entire roof surface, which lowers the temperatures of the roof top in order to ensure optimum operation of the modules. 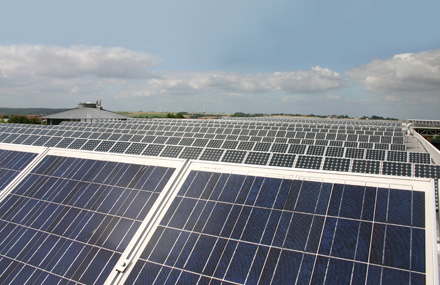 The power generated on the roof top of the plant is transported into the public power grid via the company's own transformer. The company Brinkmann is a big user of electricity, which consumes around 2 million kilowatt-hours a year for its galvanizing plant, ventilation system, profiling machines, presses and welding equipment.

Brinkmann used a NRW Act of 2004 when investing. It guarantees the photovoltaic power generators a fixed grid feed-in price of currently about 52 Euro cents per kilowatt hour for 20 years.

With the solar system the company in Höingen can now reduce the ever-increasing energy costs for many years in order to remain competitive with the BRISTA products. Thus, the investment also contributes to the preservation of jobs.